Jason Gould was hard at work on a mid-week afternoon. The echo of drills and the beep of cement trucks sounded in the background.

As cranes and construction crews slowly transformed the upward-climbing landscape of Downtown’s Columbia District, Jason stood below, next to a cluster of utility boxes covered with tape and various colors of blue. The color reflected the tint of the windows being installed above. A can of paint and a roller rested on the ground next to his feet.

Jason was also transforming the streets of the Columbia District – in his own way. If you haven’t taken a stroll through the Columbia District in a while, now might be a good time. Not only is the skyline changing day-by-day with the installation of new buildings, but things are happening on the ground-level with the painting of some of the neighborhood’s utility boxes.

As founder of Visual Urban Contemporary Art, Jason’s gallery and supplies shop in North Park have a much further reach than just a small storefront on 30th street. Over the years, Jason has developed and nurtured a network of talented San Diego artists, whose art isn’t just limited to a gallery or a private exhibition. It’s art that transforms the streets of San Diego, and therefore the everyday experience of regular and visiting pedestrians.

"It seems like a smarter approach to be thoughtful about how we reflect or relate to the particular districts. We are making the boxes more cohesive and consistent without being too redundant." 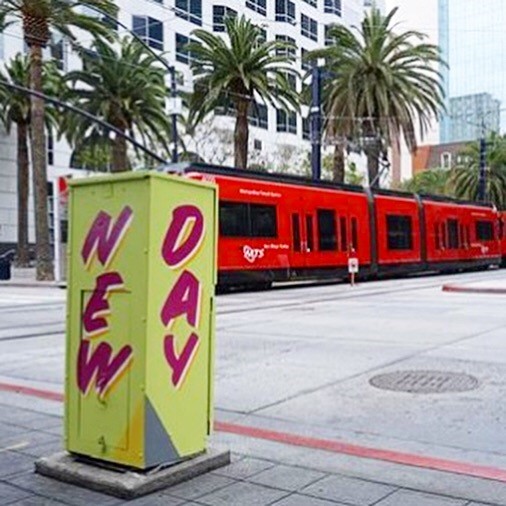 Having coordinated similar public art projects in neighborhoods like North Park, Normal Heights, and City Heights, Jason and his team are no strangers to this type of work and, thus, the perfect group to partner with in coordinating this project – not just in the Columbia District, but in all of Downtown San Diego.

Whereas his other neighborhood projects have been a bit more free-form and individualistic, Jason said he sees his role in Downtown as more akin to a curator.

“It seems like a smarter approach to be thoughtful about how we reflect or relate to the particular districts,” Jason said. “We are making the boxes more cohesive and consistent without being too redundant.”

In a neighborhood like the Columbia District, that means finding the connection between art and the current development. Take a walk to the corner of W. Ash and Kettner and, next to the construction, you’ll find a box with the word “build” carefully painted on a background of orange – purposefully chosen by artist Nat Iosbaker to resonate with the vibe of that particular site.

However small they may be, it’s not hard to see the crucial role painted utility boxes and other public art projects play in creating and sustaining a vibrant urban core.

Public art serves as a form of community activation that not only makes for a more pleasant walk down the street, but can also reflect and shape the character of a neighborhood in a way that has broader implications for business and resident attraction and retention.

“The Columbia District has so much potential for activation and programming. It is a hub of residential and commercial activity but is in need of more retail options, branding, and neighborhood programming,” said Christine Takara of EMMES Realty, which owns a couple of buildings in the central part of the Columbia District. “These efforts help develop the character of the neighborhood, promote public art, give the neighborhood an identity, and create a sense of place.”

For now, though, you might be able to see the artists at work – to take part as a community in the activation and future of a burgeoning Downtown community.

Back to all Stories